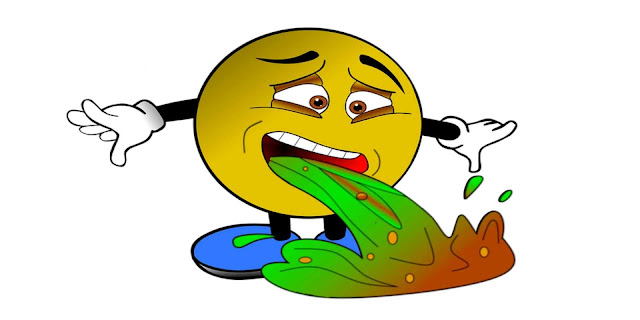 Vomiting is one of the body's normal response to the presence of foreign substances or microorganisms in the body, but can also be a sign of gastric diseases, and should therefore be investigated and treated as soon as possible.
The vomiting color can also indicate the health status of the person, and may be yellow or green in the case of colds or even fasting, or black when there is serious digestive disorders that lead to bleeding in organs of the digestive system and results in the release of blood through the mouth.  It is also possible that has red in case of active bleeding, as is the case of gastroesophageal varices.
So it is important that if the vomiting is frequent or is associated with other symptoms, the doctor should be consulted for a risk assessment is carried out and is indicated the most appropriate treatment.

The yellow or green vomit indicates mainly the release of bile that is in the stomach, often due to fasting, empty stomach, intestinal obstruction, food consumption or yellow or green drinks, and also be able to happen due to the presence of catarrh , this being more common in children with cold or flu, for example.
The yellow or green vomit usually is not serious, it can only be indicative that the stomach is empty.  However, when accompanied by other symptoms or when it is very often can mean serious health problems, it is important to see a doctor.
What to do: in addition to consulting the general gastroenterologist or clinician when vomiting is frequent or is associated with other symptoms, it is also important to drink plenty of fluids like water or coconut water to avoid dehydration and worsening of symptoms, and to maintain an diet balanced and healthy.

The black vomit usually is indicative of gastrointestinal bleeding, being composed mainly of undigested blood, which may be due to the presence of ulcers in the stomach or intestine, Crohn's disease and cancer of the stomach or intestine, for example.  Black vomiting may be associated with other symptoms such as dizziness, sweating cold and bloody stools.
What to do: in the case of black vomit, it is important to see a doctor as soon as possible so that tests are carried out and the cause can be identified by starting the treatment, which can be done through blood transfusion, drug use or even even surgery, depending on the cause.

Red or pink vomit happens mainly due to the presence of blood in the upper digestive system, which can be caused by the presence of esophageal varices, gastritis, esophagitis, ulcers and tumors in the stomach or in the stomach, for example.  This bleeding may be present in small or large quantities and should always be reported to the doctor.
What to do: in the presence of red or pink vomit, it is recommended to go immediately to the emergency, since it is essential to identify and treat the cause of the bleeding, which may involve placing a nasal tampon or surgery in the case of esophageal varices by example.
Digestive Health