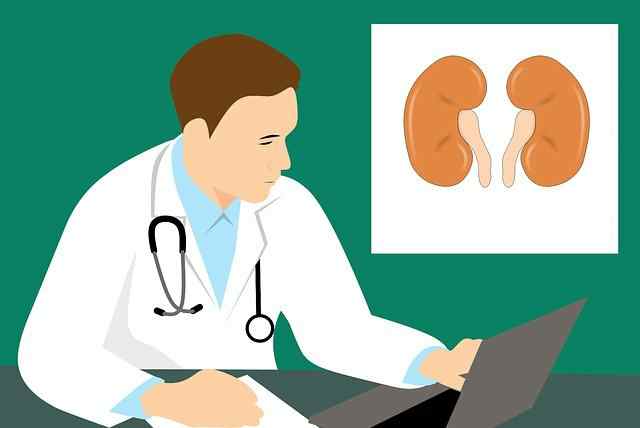 The kidney cancer, also known as renal cancer is a relatively common type of cancer that primarily affects men between 55 and 75 years of age, causing symptoms such as blood in the urine, constant pain in the lower back or increased blood pressure , for example.
Generally, cancer of the kidney is the most common renal cell carcinoma, which can be easily cured with surgery if identified early.  However, if the cancer has already developed metastases, treatment may be more difficult and may need to make other treatments such as radiotherapy, surgery.

Signs and symptoms of kidney cancer are uncommon in the early stages of the disease, but as there is progression of cancer, there may be some symptoms, the main ones being:
Blood in the urine;
Swelling or mass in the abdominal area;
Constant pain in the lower back;
excessive fatigue;
Steady weight loss;
Low-grade fever constant.
Moreover, as the kidneys are responsible for regulating blood pressure and production of erythrocytes, it is also common to a sudden change in blood pressure values, as well as an increase or a sharp decrease in the number of erythrocytes in the blood test.
In the event of these symptoms it is important to consult a general practitioner or a nephrologist to assess if there is any problem that may be causing the symptoms and, if happens, identify cancer at an early stage, making treatment.

To assess what is happening in the kidneys and analyze the possibility of cancer, the doctor may order various tests such as ultrasound, chest X-ray, CT scan or MRI, for example.
Ultrasound is usually the first test to be asked, it helps to identify and evaluate possible masses and cysts in the kidney that may indicate cancer.  As for the other tests may be done to confirm the diagnosis or staging the disease.

How is the treatment

Treatment of kidney cancer depends on the size and development of the tumor, but the main forms of treatment include:

It is made in almost all cases and helps to remove the affected part of the kidney.  So when cancer is identified at an early stage, surgery may be the only form of treatment necessary as it may be able to remove all the cancer cells and cure cancer.
In the more advanced cases of cancer, surgery may be used in conjunction with radiotherapy, for example, to reduce tumor size and facilitate treatment.

In this type of treatment they are used remedies such as Sunitinib, or Pazopanib Axitinib, which strengthen the immune system and facilitate the elimination of cancer cells.
However, this treatment is not effective in all cases and, therefore, the doctor may need to make several assessments during treatment to adjust doses and even stop the use of these drugs.

This technique is usually used in more advanced cases of cancer when the person's health condition does not allow surgery, and prevents the flow of blood to the affected region of the kidney, causing die.
For this, the surgeon inserts a small tube, known as a catheter, into the artery in the groin and guide it to the kidney.  Then inject a substance that allows to close blood vessels and prevent the passage of blood.

Radiation therapy is usually used in cases of cancer metastasis because it uses radiation to delay the development of cancer and prevent metastases continue to grow.
This type of treatment is often used before surgery to make it smaller and easier to remove tumor, or later, to eliminate cancer cells that could not be removed with surgery.
Although you only need a few minutes of treatment every day, radiation therapy has several side effects such as excessive tiredness, diarrhea or feeling of being always sick.

Who has higher risk

kidney cancer, and is more common in men after age 60, it is also more common in people with:
BMI greater than 30 kg / m²;
high blood pressure;
family history of kidney cancer;
Genetic diseases such as Von Hippel-Lindau syndrome;
smoking;
Obesity.
Besides, who needs to do treatment with dialysis to filter blood, due to other kidney problems, also have a higher risk of developing this type of cancer.
Cancer