when should i be worried about red spots on my skin 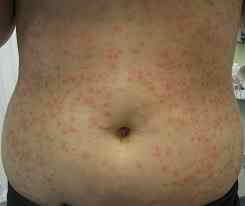 Red spots on the skin in adults can happen due to several situations, and can happen due to an allergy or be one of the signs of cancer, for example.  Therefore, it is important to pay attention to all the symptoms that may arise, such as itching, fever or cough, for example, and consult the doctor, so that an evaluation of the stains is carried out and tests are indicated to help identify the cause.
Thus, once the cause of the spots is identified, the doctor can recommend the most appropriate treatment, which may involve the use of analgesic, anti-inflammatory or antibiotic drugs, in some cases.

The main causes of red spots on the skin are:

What the spots look like: medium in size, they can be red or white and very itchy, and may contain liquid or become inflamed, disappearing in up to 3 days.  In the most severe cases, the red spots can be accompanied by symptoms such as shortness of breath, which can be life-threatening.
Red spots due to allergy can appear after contact with plants, animal hair or ingestion of medicine, for example, but they can also be caused by insect bites or food poisoning.
How to treat: symptoms can be relieved with allergy medications such as Loratadine, corticosteroids, such as Prednisone, or application of creams, such as Phenergan, prescribed by the dermatologist.

What the spots look like: They can appear on any part of the body, different sizes and affect a well-delimited region of the body.  In addition, there may also be blistering and peeling in the area.  In some cases, the infection can spread to other parts of the body, which can lead to other symptoms, such as itching and burning.
How to treat: antifungal drugs and sometimes antibiotics may be indicated by the dermatologist.

What the spots look like: they are characterized by being small, slightly raised red spots that produce itching and usually appear about 3 days after the mosquito bite.  Zika spots usually appear first on the face and spread to the rest of the body in a few hours and last about 5 days, being usually accompanied by other symptoms such as muscle or joint pain, for example.
How to treat: rest, hydration and medicines prescribed by the doctor such as Dipyrone or Paracetamol, to relieve symptoms and discomfort.

What the spots look like: they cause a lot of itching, which can make the skin redder, in addition to being swollen.  Stains can appear and disappear spontaneously over time, being more frequent in children and healthcare professionals who wash their hands with antiseptic soaps.
How to treat: use of anti-allergic drugs such as Loratadine and application of corticosteroid ointments or creams, such as Fenirax, prescribed by the dermatologist.

What the spots look like: they are small, flat, although some may be slightly raised, which can join together and form a larger spot, in addition to causing itching.  They usually start on the face and behind the ears and in a short time they spread over the body and last about 3 days.
How to treat: follow the treatment indicated by the doctor, which can be done with Paracetamol until the disease is properly controlled.

What the spots look like: they have a white center with red or pink edges, dry, flaking and causing itching, and may also bleed, in some cases.  These spots typically appear on the elbows, knees, buttocks, or scalp.  They are more frequent before the age of 30 and after the age of 50, they are not contagious and are related to genetic factors.
How to treat: for the treatment of this type of stain, the dermatologist may indicate the use of some anti-inflammatory creams or ointments.  In addition, it is also indicated to avoid sun exposure and the consumption of foods rich in fat and industrialized products, giving preference to the consumption of foods rich in omega-3 and beta-carotene.

What the spots look like: flat or raised reddish spots that can appear anywhere on the body, being more frequent in women in the nose and cheeks region, resembling a butterfly.
How to treat: corticoid and immunosuppressant drugs advised by the doctor.

What the spots look like: red spots that appear more often on the cheeks, forehead and nose in which small spider veins can also be seen on the skin.  In addition to the red spots, the skin becomes more sensitive, hot and can also be seen swelling.
The spots can remain from weeks to months and disappear after a while, and may reappear and be accompanied by other characteristic symptoms.
How to treat: use of soap and neutral moisturizers to control redness and, in some cases, the dermatologist may indicate the use of antibiotics or anti-inflammatories.

What the spots look like: red spots that appear mainly on the fingers and toes, in addition to being able to appear in the armpits, which are very itchy, especially at night.
Constant itching can lead to the development of skin ulcers in both children and babies.
How to treat: application of creams and ointments indicated by the dermatologist according to the severity of the infection, and Ivermectin, Crotamiton or Permethrin may be indicated.

What the spots look like: small spots and red polka dots that cause burning and itching and that appear mainly on the chest, thighs, face, neck and back.
How to treat: no specific treatment is necessary, it is only recommended to keep the region free from heat and apply cold compresses in the place where the rashes appear.

What the spots look like: the spots of chickenpox depend on the stage of the disease that the person is in, and small bumps can be seen all over the body and that produce a lot of itching.  Then, fluid-filled blisters may be noticed that burst and lead to crusting.
How to treat: rest and use of Paracetamol and Povidone-iodine, to prevent the blisters from becoming infected, which should be used according to the doctor's instructions.

What the spots look like: small, slightly raised red spots that don't itch and spread quickly throughout the body.  They first appear on the face and spread to the trunk and arms, and may be accompanied by fever.
How to treat: rest, hydration and use of Paracetamol according to the doctor's recommendation.

How the spots look: the spots depend on the type of skin cancer the person has.  However, the spots are usually small, irregular in shape and can increase over time, and may also bleed in some cases.  Also, some spots may be flat, extensive, or have a rough surface.
How to treat: surgery, radiotherapy or chemotherapy according to the characteristics of the stain identified by the doctor after evaluation.

What the spots look like: red spots that are very itchy, especially at night, and may flake off, and may also contain liquid and which can later generate a crust.  Excessive itching can cause skin sores, and it can also cause the skin to thicken.
Skin conditions