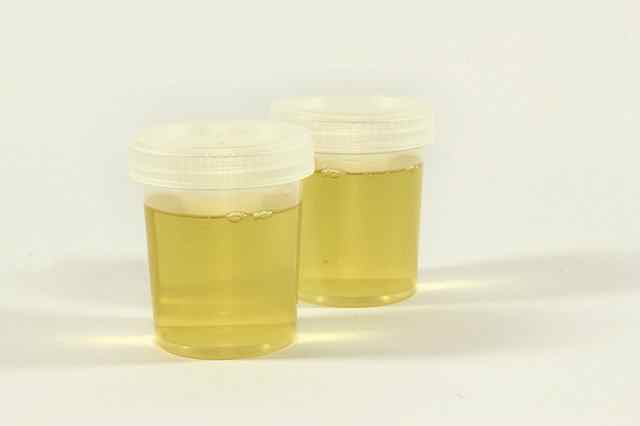 The color of the urine can change due to the intake of certain foods or medications and so in most cases it is not a warning sign.  However, the change in color can also indicate some health problem, such as a urinary tract infection, kidney stone, or liver inflammation.
The normal color of urine is light yellow, indicating that the person is properly hydrated and that the hydration level is sufficient to promote proper elimination of toxins.  However, in cases where the urine has a darker color or color other than yellow and transparent and is accompanied by other symptoms such as strong-smelling urine, burning when urinating or abdominal pain, for example, it is important that the doctor is consulted.
If the color of the urine remains altered for more than 3 days, it is recommended to consult the general practitioner, urologist or gynecologist for an assessment of possible signs and symptoms presented by the person, in addition to performing a urinalysis to identify the cause of the color change.

Clear urine is usually indicative that the person is drinking too much water, so the urine is very dilute.
What to do: it is usually not necessary to perform any type of treatment, but the doctor may recommend that the person drink a little less water during the day, since it is common in these cases for the person to feel like going to the bathroom very often .

Dark yellow urine is one of the most common changes and is usually a sign of dehydration, due to low water intake.  However, when dark urine remains for a long time, it can be a sign of liver problems that cause bilirubin to build up, leaving the urine an almost brown color.
What to do: in these cases, it is recommended to increase the daily intake of water and, if it continues for more than 3 days, it is important to consult a general practitioner.

Orange urine can appear due to excessive intake of foods rich in beta-carotene, such as carrots, papaya or pumpkin, or medications such as Phenazopyridine or Rifampicin.  In addition, the orange color can also happen in the case of liver and bile duct diseases, especially when accompanied by white or pale stools.  Dehydration can also cause the urine to be orange in color.
What to do: you should avoid eating foods rich in beta-carotene in excess.  However, if the change persists or if you are being treated with the remedies indicated above, it is advisable to consult your general practitioner to start the appropriate treatment.

The red or pink color is usually caused by the presence of blood in the urine and therefore can be a sign of a urinary tract infection, kidney stone or kidney problems, prostate growth, tumors, kidney cyst or in people who go for walks or runs long, and may also be accompanied by other symptoms such as pain when urinating or fever.
However, the red color can also be caused by consuming reddish foods like beets or products with red food coloring.
Some medications can also make the urine red or pink, as in the case of Rifampicin and Phenazopyridine.
What to do: if you have eaten reddish foods, you should avoid eating these foods to assess whether the urine returns to normal.  In other cases, it is recommended to consult a general practitioner to diagnose the problem and initiate appropriate treatment.
In case it is caused by the use of medication, it is advisable to inform the doctor who prescribed the medication so that the possibility of changing the medication can be evaluated.

Purple urine is a change that appears only in some patients with a urinary catheter due to the transformation of some pigments by the bacteria found in the tube of the catheter.
There is also a rare condition called Purple Urine Bag Syndrome, which is more common in older women who have a permanent or long-term bladder catheter, for example.
What to do: In these cases, it is recommended to consult the general practitioner or a urologist because it may be necessary to start treatment with antibiotics.

Blue urine is usually caused by blue dyes or the use of methylene blue contrast agent commonly used in CT scans, liver surgeries, such as ERCP or drugs such as Sepurin, for example.
Also, it can be caused by some other drugs like Amitriptyline, Indomethacin and Sildenafil, which is marketed under the name Viagra.
What to do: it is a normal change in the urine that usually disappears up to 24 hours after the use of contrast.

Green urine is not a serious condition and is mainly caused by ingesting food, artificial dyes, medications such as Amitriptyline, or by using contrast in some diagnostic tests.
Some infections, such as those caused by Pseudomonas, and the presence of a bladder fistula in the intestine, in which bile is released, can also turn the urine green.
What to do: eliminate very green foods or products that may contain food colorings from your diet.  However, if the problem persists for more than 2 days, it is advisable to go to the general practitioner to identify the problem and initiate appropriate treatment.

Brown or very dark urine is usually a sign of severe dehydration, however, it can also indicate liver problems, such as hepatitis or cirrhosis, for example.  Also, some medications like Methyldopa or Argirol can darken the urine.
In the same way, the excess of some foods can also make the urine dark, as is the case with fava beans, for example.
What to do: In these cases, it is recommended to increase your water intake and, if the change persists, consult a urologist or general practitioner to identify the cause of the problem and initiate appropriate treatment.
In case it is caused by food or medication, it is advisable to consult the doctor to change the treatment or the nutritionist to change the diet.

Whitish urine, also known as albuminuria, can be caused by the presence of a severe urinary infection, usually accompanied by burning when urinating and fever.  In addition, whitish urine can also be caused by a lymphatic fistula that arises especially in cases of neoplasia or abdominal trauma.
What to do: It is advisable to consult a general practitioner to perform a urinalysis and identify the problem in order to initiate appropriate treatment.
Sexual Health