What color poop indicates a problem? 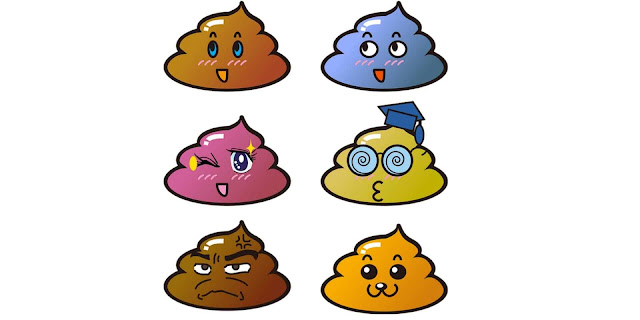 The color of the stool, as well as its shape and consistency, usually reflect the quality of the diet and, therefore, are closely related to the type of food ingested.  However, changes in color can also indicate intestinal problems or diseases, such as hepatitis or gastric ulcer, for example.
Normally, stools should be brown in color, which shouldn't be too dark, but not too light either.  However, any variation in color is very frequent and can happen without indicating a problem, as long as it does not last for more than 3 days, as it can vary according to the food ingested.
Check out what the shape and color of poop can say about your health:
When the change in stool color persists for more than 3 days, it is important to consult a gastroenterologist to identify if there is a problem and initiate appropriate treatment, if necessary.

Green stools are more common when the intestines are working too fast and don't have enough time to properly digest bile salts, such as during stressful situations, diarrhea from bacterial infections, or irritable bowel attacks, for example.
In addition, the dark green color can also appear when eating lots of green vegetables, such as spinach, or when taking iron supplementation, and this coloring is common in newborns.
What to do: You should assess if there is an increased intake of green vegetables or if you are taking a medicine with iron in its composition.  If this is not the case, it is advisable to consult a gastroenterologist if the problem persists for more than 3 days.

Dark or black stools are usually accompanied by a much more foul odor than normal and could be a sign of bleeding somewhere along the digestive system, due to esophageal ulcers or varices, for example.  However, dark poop can also be produced by the use of iron supplements.
What to do: if you are not taking supplements or medicines with iron, it is recommended to consult a gastroenterologist as soon as possible or go to the emergency room, if other symptoms appear, such as fever, excessive tiredness or vomiting.

This type of poop is usually a sign of difficulty digesting fat and, therefore, may be related to problems that reduce the intestinal absorption capacity, such as Celiac disease, or be caused by the lack of enzyme production in the pancreas, which may indicate problems in this body.
In addition, yellow poop can also appear in the case of intestinal infections, being accompanied by other symptoms such as fever, diarrhea and belly pain.
What to do: you should be aware of other changes in stool characteristics, such as consistency and shape, and if the change lasts more than 3 days, it is recommended to consult a gastroenterologist to identify the problem and initiate appropriate treatment.

This poop color usually indicates the presence of blood and, therefore, is more frequent in situations of hemorrhoids, for example.  But bleeding can also occur due to infections, inflammatory conditions such as Crohn's disease and ulcerative colitis, or more serious conditions such as cancer.
What to do: if the amount of blood in the stool is small, it is advisable to consult a doctor for evaluation.  However, if there is a lot of bright red blood, you should immediately go to the emergency room.

Pale or whitish stools appear when there is a lot of difficulty in the digestive system to digest fat and, therefore, are an important sign of problems in the liver or bile ducts.
What to do: it is advisable to consult a gastroenterologist to perform diagnostic tests, such as CT or ultrasound, diagnose the problem and initiate appropriate treatment.

What does baby stool color mean?

The baby's stools shortly after birth have a dark greenish color and a sticky, elastic texture, which is called meconium.  During the first days, the color becomes greener and then lighter, according to the amount of fat and water present in the milk he drinks.  Generally, stools are usually watery and with some lumps.
During the first 15 days it is common for babies to pass watery stools 8 to 10 times a day, or every time they breastfeed.  When the mother is constipated, it is possible for the child to go more than a day without having a bowel movement, but when he does, the stool should have the same watery, lumpy appearance.
At 6 months, or when the baby starts a diversified diet, the stools change color and consistency again, becoming more similar to the stools of a child or adult, both in terms of color, consistency and aroma.  That's because the digestive capacity is already starting to be more complex and the food he eats is increasingly similar to the food of the rest of the family.
Digestive Health