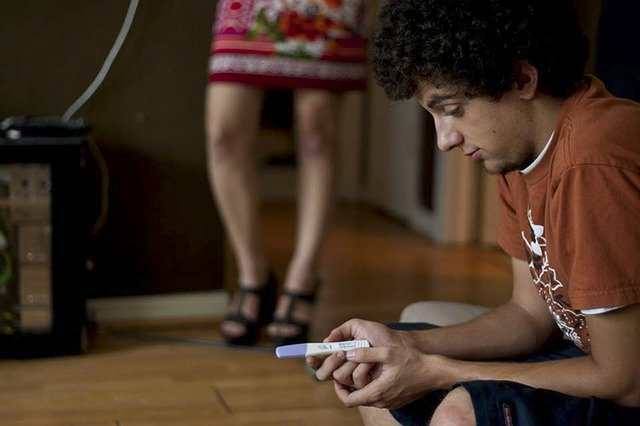 Psychological pregnancy is an emotional disorder that occurs when pregnancy symptoms are present, but there is no fetus developing in the woman's uterus,  the main symptom being absence of menstruation, and which can be confirmed with pregnancy tests and ultrasound.
Psychological pregnancy, which can also be called pseudocyesis, mainly affects women who really want to get pregnant or those who are very afraid of getting pregnant, as happens during adolescence, for example.
Treatment for psychological pregnancy can be done with the use of hormonal drugs to regularize menstruation, but it is also essential to follow up with a psychologist or psychiatrist to eliminate the causes that led to the development of this problem.

The symptoms of psychological pregnancy are the same as those of a normal pregnancy, despite the fact that there is no baby being formed, the main ones being:
Absence of menstruation;
motion sickness;
Somnolence;
Food cravings;
Hormonal changes;
Belly and breast growth;
Weight gain and increased appetite;
Sensation of feeling the fetus move;
Breast milk production.
It is still not known for sure why these symptoms appear in cases of psychological pregnancy, however, it is possible that psychological stimuli generate an increase in the production of some pregnancy hormones, which results in symptoms similar to those of a real pregnancy.

The diagnosis of psychological pregnancy is made by a general practitioner or obstetrician, who may request:
Pharmacy pregnancy test;
Blood beta HCG test;
Transvaginal or abdominal ultrasound.
If the woman has a psychological pregnancy, the pregnancy tests, both the urine and the Beta HCG blood, will always give a negative result due to the absence of the fetus in the woman's uterus, which stimulates the production of hormones that indicate its presence.  Likewise, the ultrasound will show the absence of the gestational sac, as well as signs that could indicate a possible pregnancy, such as fetal heartbeat or the presence of the placenta.
In addition, the doctor may order other tests, such as levels of the hormone prolactin in the blood, or a brain scan to rule out the presence of prolactinoma that may be causing milk production.

The causes of psychological pregnancy are not yet known, however it seems to be related to the following factors:
Intense desire to get pregnant and difficulty getting pregnant;
Great fear of getting pregnant;
Depressive disorders related to infertility and sterility.
Furthermore, in some cases, the existence of marital problems also seems to be related to the development of a psychological pregnancy.  Therefore, it is recommended that, in cases of marital problems, psychological therapy be carried out individually or as a couple.

The main strategies for dealing with and treating psychological pregnancy include:

1. Therapy with the psychologist

In some cases, the negative results of pregnancy tests are not enough to convince the woman that she is not pregnant, and it is necessary to start therapy sessions with a psychologist.  In these therapy sessions, the psychologist, in addition to discovering the reason behind the psychological pregnancy, will help the woman to better deal with the situation, helping her to overcome the problem.
In some cases, the woman can even be deeply disgusted, sad and disillusioned with the absence of pregnancy, which can lead to constant sadness and depression, and in these cases follow-up with a psychiatrist is necessary.

2. Control anxiety and desire to get pregnant

Anxiety is one of the reasons that often leads to the emergence of a psychological pregnancy and in most cases it is caused by the intense desire to get pregnant or by the pressure caused by the family or society.
Thus, the important thing is to keep anxiety under control using, if possible, natural remedies such as passion fruit tea, valerian, rosemary, chamomile or catnip, which are medicinal plants with calming and relaxing properties.
Watch the video to see other excellent tips from nutritionist Tatiana that will help you get rid of stress and anxiety:
In addition, in the most serious cases it may even be necessary to undergo medical treatment with a psychiatrist, where medicines to control anxiety such as Diazepam, Alprazolam or Lorazepam, for example, may be prescribed.

Women who suffer from infertility or who enter menopause early can have a psychological pregnancy if they want to become pregnant and feel that their time is running out.  In these cases, the best solution is to immediately consult the gynecologist when you think you are not getting pregnant, so that the best treatment can be recommended.
In most cases of infertility or early menopause, treatment involves hormone replacement with hormone therapy.

Sometimes, the presence of marital problems or the history of relationships that ended in abandonment or separation leads to constant fears and insecurities, which can end up causing a psychological pregnancy.
In these situations, it is very important to resolve all marital problems and try not to look to the past as an example.  Also, pregnancy should never be seen as a way to hold on to a relationship, as this type of thinking will bring anxiety, insecurity and low self-esteem.
In addition, in the most serious cases it may be necessary to undergo tests to find out if there are hormonal problems, and it may be necessary to start hormone therapy that must be indicated and monitored by the gynecologist.
Pregnancy